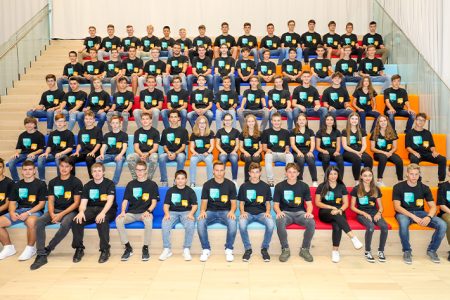 The first months of his apprenticeship as a polymechanic are now a thing of the past – Michael Dörig has successfully finished his period of probation. This makes him the 8000th apprentice to have been trained at Bühler Group over a 100-year history of vocational training. Around the globe, some 600 apprentices at 25 locations in four continents are currently undergoing their vocational training. This broad, internationally oriented dual vocational training offers Bühler two significant benefits. It proactively wards off a potential lack of skilled employees, and it prepares young adults for a career in a global company.

A total of 70 apprentices started their vocational training in Switzerland this August – 10 women and 60 men. Together, they have even now reached a milestone for Bühler in their as yet short professional careers. Along with them, a total of 8,013 young adults have undergone or are still undergoing their dual vocational training. Michael Dörig, the 8000th apprentice, has now also passed his period of probation in his vocation as a polymechanic. “The figure is impressive, it shows the great influence of vocational training at Bühler. It was lucky that I started as the 8000th and I’m happy about it.” In his daily work, however, the number plays no role. Michael Dörig is currently concentrating on the first important exam. He has set clear targets for his further vocational training: “I want to perform well every year, and my goal for the fourth year is an assignment abroad. In the end, I want to finish the apprenticeship with good grades,” says Dörig.

Bühler’s instrument for warding off a lack of skilled labor

Bühler is currently training some 600 apprentices at 25 locations. Apprentices do add value for the companies they work for, as the latest study (in German) by the State Secretariat for Education, Research and Innovation (SERI) confirms. And not only that. Vocational training is one of the most important factors for the company for imparting knowledge within the organization as well as between generations. It enables the Group to proactively avert the looming shortage of skilled labor. “Vocational training is a long-term strategy for us that we apply in a targeted manner,” says Andreas Bischof, Head of Apprenticeship at Bühler. He adds that when a potential lack of specialized labor appears, for example as a result of retirements, Bühler can apply its global know-how in the field of vocational training to close such gaps.

This has resulted in the institution of vocational training programs by Bühler, for instance, in the United States, for which the company has obtained governmental approval. “This guarantees access to and mobility within the labor market,” explains Bischof. In order to retain these carefully educated young people after they have completed their vocational training, Bühler offers them individual support in planning their careers starting in the second half of their apprenticeships. The value of this effort is borne out by the fact that, for example, 29 percent of all Swiss employees completed their vocational training with Bühler. At the same time, former apprentices are also attracted by careers outside Switzerland. At present, 28 former apprentices are working for Bühler in four continents. Also in this respect, the company selectively prepares interested apprentices for their missions across the globe.

In order to counter the lack of skilled labor in the first place, Bühler lets interested school-leavers know that the company offers more than just pure training in one single vocation. Bühler prepares the young people for the labor market in the best possible manner by fostering allrounder skills. For example, apprentices pass through different departments which have a different focus. In the future, digitalization will be integrated even more into education, alongside the development of social skills, creativity, exchange, and diversity. Some of the young adults may undergo training in project management or do a stint abroad. Be it China, Indonesia, Vietnam, India, South Africa, Brazil, the United Kingdom, Germany, France, or the United States: Since the introduction of these periods of training abroad twelve years ago, as many as 200 apprentices have already spent several months of their vocational training at a Bühler location outside Switzerland. The benefits of this approach are obvious: Apprentices gain a first-hand experience of different cultures and languages. They enhance their professional and social skills, broaden their minds, and become fit for a job in the international labor environment that Bühler offers.

Stefan Scheiber, CEO of Bühler Group, stresses the importance of international mobility and sound, varied basic training for the organization: “Training and continuing education enable Bühler to renew itself permanently. We place our trust in our apprentices at an early stage, but we also demand a lot from them. We unlock the international world of labor for them, because we want them to continue to work for us later on – as open-minded and innovative employees skilled in a wide range of tasks, and either in Switzerland or anywhere else in the world.”