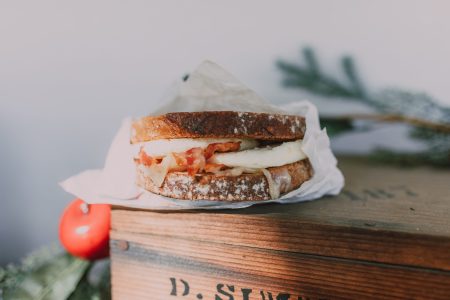 Ahead of the Jubilee weekend, Warburton’s have uncovered Brits’ perfect sandwich to honour the coronation celebrations it is, Smoked Salmon and Cream Cheese, served in white bread and cut into four triangles, with the crusts left on. When it comes to washing down their celebration sarnie, the classic cup of tea was deemed the perfect beverage.

The research, conducted this month and questioning 2,000 nationally representative UK adults, saw Bacon, Lettuce & Tomato (10%) and Coronation Chicken (9%) also firm favourites for princely picnics this bank holiday, coming in second and third place. And whilst the Queen likes hers cut into perfect circles to form ‘pennies’, the majority of Brits (37%) want theirs cut into four triangles, with 72% preferring the crusts on.

White sliced bread reigned supreme according to the majority of Brits (21%), whilst wholemeal (17%) and the baguette (13%) received commendable knighthoods in second and third place.

When it comes to considering the most quintessentially British sandwich filling, the classic Cucumber ruled the roost with 46% of the vote, with egg and watercress (45%) and ham and cheese (32%) following closely behind. The findings come as the Queen was reported to enjoy eating a jam sandwich every day since she was a girl; 10% of the nation follows suit in admitting to the daily ritual.

And what’s a sandwich without a sidekick? Everyone knows that crisps are the best courtiers to our sovereign sarnie, and ready salted (37%) was crowned the winner, with cheese and onion (17%) and salt & vinegar (12%) also proving popular.

When it comes to dessert, a lemon and Swiss roll amaretti trifle was recently named as the official platinum Jubilee pudding. When asked if they thought it sounded appealing, it appears nation is split, with 46% saying they’d like to try the trifle during the celebrations. Of those, 15% said they would be trying their hand at creating the marvel. That’s over 10 million Brits putting their kitchen skills to the test this weekend!

The research also found that 47% of Brits are planning to celebrate the Jubilee by meeting up with friends and family, with 34% planning to attend a local/community celebration, and 25% taking part in a street party or official ‘Big Lunch’ event. This means drinks will certainly be on the cards and while 23% of Brits will be washing down their sandwiches with a traditional cup of tea, a further 13% are opting for prosecco and another 12% plumping for fizzy soft drinks.

A royal spokesperson commented “We’re delighted to see smoked salmon and cream cheese given the crown this Jubilee weekend, and in white bread no less – a roll fit for royalty. Whatever sandwich one chooses for the royal celebrations this bank holiday, we hope everyone enjoys raising a toast to our supreme Queen for 70 won-dough-ful years on the throne!”