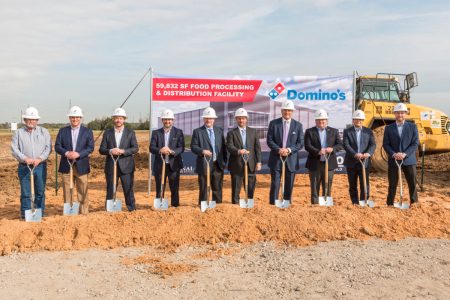 The facility will produce fresh pizza dough for more than 300 Domino’s stores located throughout the region. It will feature automated technology, including ingredient batching, mixing and portioning, weight adjustment, tray stacking and spiral coolers, which will produce 20,000 trays of dough balls per day. Set to open in late 2020, the facility will create 85 new jobs.

“The continued growth of Domino’s in the U.S. has created a demand for additional supply chain capacity,” said Stu Levy, Executive vice-President of Domino’s supply chain services. “This centre in Katy will manufacture our fresh pizza dough and also serve as a warehouse and distribution centre for our stores in South Texas and the parts of Louisiana. We look forward to opening this centre, bringing even more jobs to the local community and ensuring our stores can continue to provide a great customer experience.”

Speaking to Yahoo Finance, Allison states that he had personally sampled some vegan proteins and believes that “the industry is doing a pretty good job today particularly around things that come in the form of crumbles — so think about sausage or beef that you would put on a pizza,” suggesting that new launches would come in the form of slices rather than ground beef.

In a recent trial by Dominos Australia, pizzas topped with plant-based beef sold out weeks after launch, and in September Dominos UK confirmed it was trialling 100 percent plant-based pizza at a number of unannounced locations.

Allison continued: “If they prove to have consumer appeal and are items we could offer at a good value to the customers and be profitable for the franchisees, and if there is good stable supply for those products, you may see some of them on the Domino’s menu.”