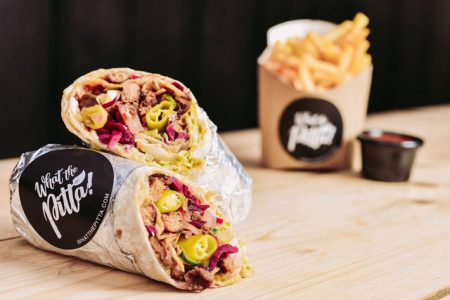 The UK’s leading vegan eatery What The Pitta are thrilled to announce the launch of their Vegan Gyros – the delicious Greek dish launched into their Camden branch on 14th September 2019, and will be rolled out to their other three branches by early October 2019.

What the Pitta are already famed for their unique, vegan kebabs, made with non-GMO soy pieces marinated in a blend of secret spices with handmade bread, homemade hummus, tzatziki and fresh salads, and were also the first to launch Vegan Nuggets into the UK earlier this year. What The Pitta launched in London 3 years ago, in 2016, and now have four locations in Boxpark Croydon (London), Boxpark Shoreditch (London), Camden (London) and Brighton. The introduction of Vegan Gyros to the menu is just the latest in some exciting moves for What The Pitta in 2019.

For £7.50 you can get your hands on What The Pitta’s Vegan Gyros are loaded with soya pieces marinated in their signature secret spice blend, vegan tzatziki, tomato, fries and a sprinkle of oregano, all wrapped in authentic, hand-made pitta bread. Other items on the What The Pitta menu include a variety of purse-friendly meal deals and plant-based options such as Doner Kebab, Doner Chip Box, Mezze Box, homemade falafel wraps and baklava.

What The Pitta was the brainchild of British-Turkish friends Cem Yildiz and Rojdan Gul. Cem had recently become vegan and was passionate about the health and environmental benefits of going meat-free, but was missing the grilled flavours of his favourite Turkish foods. As it happened, Roj’s

uncle had been perfecting his own cult vegan kebabs in Germany for years, so after an educational trip to learn the secret recipe, What The Pitta was born and their first pop up opened in August 2016 at The Pump, Shoreditch. Their Croydon branch soon followed, with the opening of Shoreditch in Summer 2017, Camden in Spring 2018 and Brighton in Autumn 2018.

What The Pitta’s Vegan Gyros are currently available for £7.50 from their Camden branch (89-91 Bayham Street, NW1 0AG). For more information visit www.whatthepitta.com.