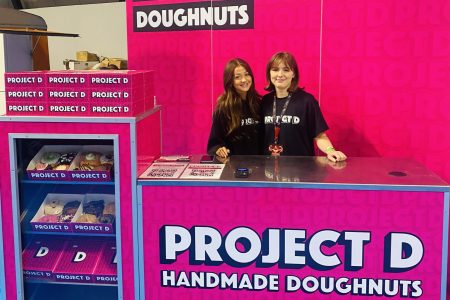 The company credited with creating the UK’s first protein doughnut is expecting “record sales” of its product thanks to a multi-sports exhibition being attended by Arnold Schwarzenegger this week.

Derby-based company Project D will be selling its protein doughnuts alongside some of its standard doughnuts at the Arnold Sports Festival, which takes place from Friday to Sunday this week at the NEC in Birmingham.

Project D launched the protein version of its popular white chocolate and milk chocolate doughnuts at the same event in 2021.

The doughnuts, which contain 20g of protein in their toppings, were designed as a tasty supplement for body builders, athletes and fitness enthusiasts. Their popularity in 2021 meant the company brought them back again for this year. If the company sees the same level of demand for them, it plans to make the protein versions a permanent addition to its menu.

Arnold Schwarzenegger, who founded the global Arnold Sports Festival in 1989, is scheduled to appear at a ‘Meet Your Heroes’ audience at the event on Saturday. Other speakers at this event include ex-boxer Sugar Ray Leonard, David Goggins and former World’s Strongest Man Eddie Hall.

“We completely sold out of everything last year, every single day. It was a huge event for us,” explained Max Poynton, Operations Director at Project D. “We’ve literally been inundated ever since with messages from last year’s attendees asking if ‘we’ll be back’. I’m delighted to say that we will – with even more products than last year, and the biggest event stand we’ve ever built.”

The company will be selling its doughnuts three stands across from the exhibition space, with a four-metre high stand in the centre of the main hall.

“The protein doughnuts, in particular, are set to sell like hot cakes! They are the perfect post-show, post-exercise treats for the super-fit men and women that tend to attend this event.,” Mr Ponyton added.

“We created them purely as a limited edition for the Arnold Sports Festival last year. But if they get the same reception this year, we are definitely thinking about putting them on our main menu available to the public.”

Project D has grown from three staff to 120 employees in just four years, and manufactures around 48,000 doughnuts a week at its headquarters in Spondon, Derby.