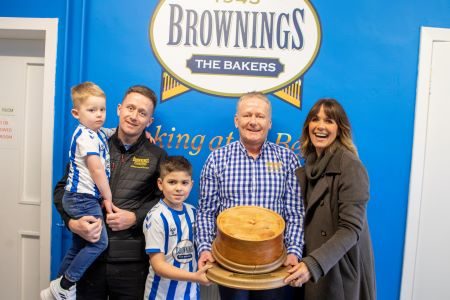 Brownings the Bakers of Kilmarnock has once again taken the top prize in the 22nd World Championship Scotch Pie Awards which were announced this week.

Brownings the Bakers Ltd are once again World Champions as the bakers of the best Scotch Pie in the World!

The annual awards recognise excellence in the production of the perfect pie and are a firm favourite in the calendar with bakers and butchers vying for a top prize in the 11 categories including the iconic Scotch Pie, Football Pies & Savouries, Macaroni Pie, Steak Pie, Sausage Roll, Cold Savoury, Hot Savoury, Vegetarian Savoury, Haggis Savoury, Bridie and Apple Pies.

The annual judging day, which was held in a COVID safe setting late last year, saw over 70 butchers and bakers enter more than 400 of the nation’s best pies for judging by over 50 experts in their field. So, for Brownings the Bakers Ltd to have taken a prize is a great achievement.

‘I’m absolutely delighted to have won the best Scotch Pie at the World Championship Scotch Pie Awards for the second time. It’s a privilege to have won this award with so many amazing bakers and butchers entering their products. I couldn’t have done this without my amazing team at Brownings who have worked so hard particularly for the last two years in challenging circumstances.’

Alasdair Smith, Chief Executive of Scottish Bakers who run the competition on behalf of the bakery and butchery trades said, “We have overcome everything COVID could throw at us this year to celebrate the best pies and as always the results do not disappoint.

“It is with great pleasure that we can announce that Brownings the Bakers has taken a prize,” he continued, “and they can be rightly very proud of their achievements. We took delivery of over 400 entries this year, so to win is no small feat and to know that every winning product was lovingly made from scratch from locally sourced ingredients, freshly made daily by skilled craftspeople just goes to show the skill, creativity and hard work of each and every entrant.