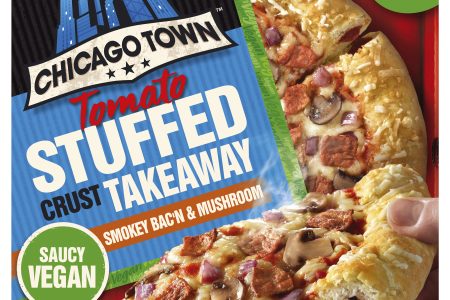 According to a new national survey, brits love vegan food so much that a third of them are now eating it twice a week, and it’s no surprise that millennials make up the majority of these fans. The survey, commissioned by Chicago Town, also revealed that 20% of millennials opt for vegan friendly meal choices on a daily basis, with almost half of the 18-24 year old’s surveyed claiming to have eaten more vegan food in the last year than ever before.

And the nation says vegan food is not only better than ever, far from being a fad, it is here to stay – and is enjoyed at mealtimes even in non-vegan households.

Chicago Town spokesperson Rachel Bradshaw said: “Non-vegans have really taken to vegan food in 2020. In fact, 20% of UK non-vegans eat Vegan meals twice a week, according to our survey results.

“A further 12% eat vegan food at every meal or at least once a day, and another 14% eat it once a week. It’s clear from our research that vegan food is not just for January – indeed, 63% of non-vegans told us that the popularity of vegan food is far more than just a flash in the pan – and is here to stay.”

The Chicago Town survey also revealed that a third of non-vegans are planning to incorporate more vegan food into their regular diet in 2021. The reasons for the change are mainly due to the environmental impact of meat consumption (45%), the personal health benefits (41%) or simply to add variety in their diet (26%).

Rachel Bradshaw added: “Our research reveals that a quarter of non-vegans enjoy vegan food so much that they’ve considered switching to a vegan-only diet. It’s also great to hear from our survey that 24% of non-vegans also tried our Vegan BBQ Jackfruit pizza in the last year, with 84% saying it was either ‘great’ or ‘good’.

“We’re really excited to have expanded our vegan offering in Takeaway as well as launched our first Deep Dish variant – the first vegan pizza of its size on the market. Both are indulgent and full of flavour so will be tasty whatever your dietary requirements.”

More than six in 10 non-vegans admit that vegan food has improved in flavour and quality over the last two years with 41% saying there is now a much wider range of vegan foods available in the supermarkets than previously.

Toni Vernelli, International Head of Communications and Marketing at Veganuary said: “Choosing vegan options is one positive step each of us can take to protect our health and our planet so it’s no surprise that the demand for plant-based food continues to increase exponentially. It’s great to see companies like Chicago Town embracing this opportunity and providing tasty, familiar, affordable options for the growing number of vegan-curious consumers.”