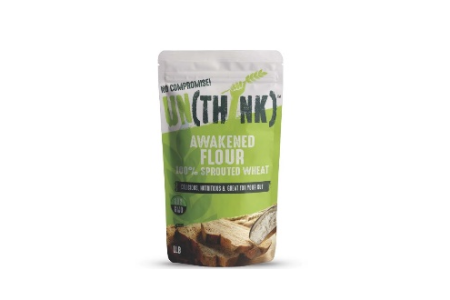 AgTech company AgriFORCE has announced the commercialisation of UN(THINK) Awakened Flour, following on from successful completion of the scaled up batch trial. Commercialisation will follow at the beginning of 2023 and focus on bakeries in Canada and the US, followed by a direct-to-consumer launch.

Announced earlier this year, Awakened Flour is a ‘better for you’ flour that uses a 100% natural patent-pending process which creates a gently germinated flour that is nutritious, easier to digest and good tasting. The company’s sprouting process increases the bioavailability of vitamins and minerals, allowing them to be absorbed by the body while changing the total amount of fibre in whole grain.

The company’s production is currently based in Saskatoon, Saskatchewan, Canada, one of the world’s largest grain producing regions. The company has secured strategic partnerships with local non-GMO suppliers and specialty milling partners.

“UN(THINK)’s Awakened Flour has the ability to become the gold standard of sprouted flour,” said Hernando Ruiz-Jimenez. “Consumers are eager for products that offer enhanced nutritional value and better digestion. We’re thrilled to have the opportunity to begin our relationship with bakeries, restaurants and other B2B customers throughout North America.”

The flour only contains on ingredient, wheat, and will be used in a range of applications including pancake mixes, breads, pastas and more. The company is adopting a B2C and B2B approach where the flour will be used as an ingredient for bakery, snacks and dough manufacturers, but will also become available directly to consumers, bakeries and other customers in late 2022.

The company recently conducted a consumer survey with 1000 respondents across the US to register interesting in purchasing a flour alternative; which it confirmed. Findings also indicated that consumers are willing to pay more for alternative flours. 56% of millennials use flour regularly at home, and 88% consume flour-based products at least twice per week.