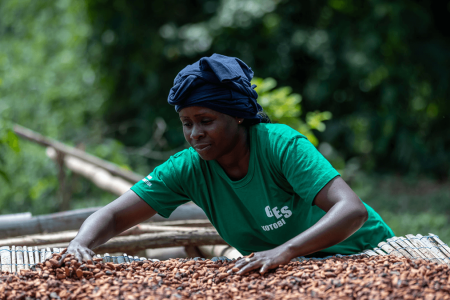 Fairtrade Fortnight, the annual campaign calling for cocoa farmers to be paid fairly for their work and earn a living income, began on February 24 and will continue until March 8. This year Fairtrade’s nationwide ‘She Deserves’ campaign is highlighting the hidden inequality experienced by the women and girls behind the multibillion global chocolate industry. In West Africa, where 60% of the world’s cocoa is grown, the average woman cocoa farmer earns as little as 23p a day.

In Côte d’Ivoire, despite carrying out 68% of the labour, which involves planting and harvesting, hacking cocoa pods, fermenting, drying and bagging up the cocoa beans as well as domestic duties in the home, women have fewer rights than men, get less money than men and are often landless.

Fairtrade’s industry-leading Standards, innovative programmes and ground-breaking research are changing this for some. Fairtrade is striving towards equality for women and is enabling women farmers to earn better incomes and become leaders in their fields.

Julia Nicoara, Director of Public Engagement at the Fairtrade Foundation said: “Many of us don’t know the bitter truth of exploited farmers behind much of our chocolate, with women doing much more of the work for much less of the pay. This Fairtrade Fortnight, our campaign is ‘She Deserves Fairtrade’, and we’ll be telling and hearing the stories of some of the inspirational women cocoa growers.

During and in the run up to the launch, Fairtrade’s grassroots networks of around 1,600 Fairtrade schools and towns will be holding story telling events throughout the two-week campaign to highlight the women’s stories and engage the public in the ‘She Deserves’ campaign.

Fairtrade will arm its supporters up and down the country with more than 15,000 little attention-grabbing ‘storybombs’ illustrated by DorcasCreates, featuring the stories of women cocoa farmers, to be hidden and found in local communities spanning Land’s End to John o’Groats. Once discovered, that person will be invited to re-hide the story to continue the treasure hunt.

A new 60-second animation short featuring illustrations by DorcasCreates and voiced by model Mariah Idrissi will explore the story of women cocoa farmers who do the lion’s share of the work, but earn just 23p a day. The film sends a strong message that together we really can make a big difference by taking small actions like choosing Fairtrade.

Two cocoa farmers – Rosine and Leocadie – will visit the UK to tell their stories about how, against the odds, they have become leaders in their communities.

Nicoara added: “We can easily feel overwhelmed by the world’s problems and how to make a difference. Choosing Fairtrade is a very simple way to fight poverty and ensure farmers are getting a better deal.

“Only Fairtrade protects farmers from the volatility of market price crashes that trap many cocoa growing communities in poverty. Fairtrade guarantees farmers get a higher than market price when the market crashes, plus an additional sum to invest in their communities, getting them closer to a living income. This means they can send their children to school, develop their communities and grow their businesses.”