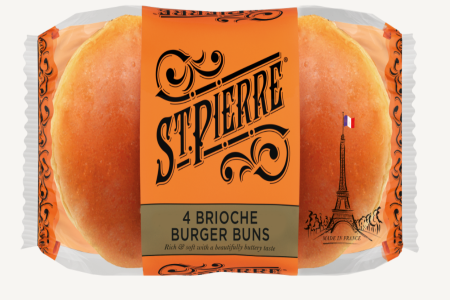 The leading brioche brand, which is up 80 per cent year on year, cemented its position as the UK’s best-tasting brioche in independent sensory hall tests in January. St Pierre is also the UK’s number one brand in burger buns and hot dogs, delivering £12 million to the category.

Chris McLaughlin, Commercial Director at St Pierre Groupe comments, “We are delighted to reach this milestone and see our St Pierre products on shelf in all four of the UK’s biggest multiple retailers. St Pierre offers exceptional quality and taste, and in partnership with our retailers, we have been able to help consumers elevate their everyday meal occasions with our delicious range of brioche.”

The news comes as St Pierre launches a new pack size of its Brioche Burger Buns, which are now available in both a six and a four-pack format to appeal to a wider demographic.

McLaughlin continues, “The branded burger bun and hot dog category has now reached £38mn, with growth of 180 per cent in the last two years. Working with our retailers to see how we can help continue to grow the category, we developed a smaller four-pack of our best-selling Brioche Burger Buns to meet our consumers needs and deliver in-store and on shelf.

“Seventy per cent of households without children would rather buy a four-pack than a six-pack and food waste is a growing concern for shoppers. By launching a four-pack, we can help our retailers to bring new shoppers into the category, driving sales and appealing to a younger demographic.”

St Pierre also offers a lifeline for retailers during the unpredictable British summer, with extended shelf-life that helps reduce wastage – another element that appeals to retailers.

St Pierre is the flagship brand of branded bakery business, St Pierre Groupe. The St Pierre brand is America’s number one brioche and recently launched into food service in the Middle East. With a global retail sales value in excess of $250mn, St Pierre Groupe has doubled its headcount in the last 18 months, appointed David Milner as CEO and opened its first US headquarters in Cincinnati, Ohio.